⁌the solo project of Jack Milwaukee, Italian multi-instrumentalist based in London since 2011. Inspired by early 80s synth pop, cold and dark wave, M!R!M has been releasing on labels as Fabrika and Manic Depression, Avant Records⁍ https://m-r-m.bandcamp.com/

✍︎ BIO
Since his debut album, he's been touring and playing shows all around Europe building an important following and a significant name within the scene. On January 31st, 2020, Avant! Records released his third full-length, The Visionary. Still featuring Milwaukee at the helm along with selected collaborators as supplementation, The Visionary is a further evolution in M!R!M sound, which showcases how the musician’s vision has evolved throughout the years.Holding firmly to the vibes that recall the most dreaming 80’s, Jack Milwaukee this time blends together that typical FM synth timbre, which has always characterized the artist, with deeper and sumptuous sounds found within the notes of Mellotron and sax; overcoming previous Lo-Fi approaches to undertake a solid, prominent and more mature path. The Visionary is a collection of songs pieced together in a meaningful and harmonious way where the storytelling is very vivid and fundamental. Trapped between hope and melancholy each track evolves smoothly into another one until it gets to a mystical end, a point of no return. From syncopated punchy bass lines drove by solid drum beats to elegant violin quartets accompanied by almost religious choirs, The Visionary is an engaging work that doesn’t remain only inside the robes of shimmering synth-pop tunes but also explores more intimate and private territories as an ode to the most deep feelings. Pulling from the ‘pop' approach of mid 80's synth-pop pioneers like New Order, The Wake, Tears For Fears to most iconic figures of the Italian 80’s era, M!R!M dialed in on a clear understanding of its own specific sound, which has since evolved.
The Visionary is the ultimate unified vision of M!R!M’s work, it’s the sweetest transition of the most nostalgic daydream. 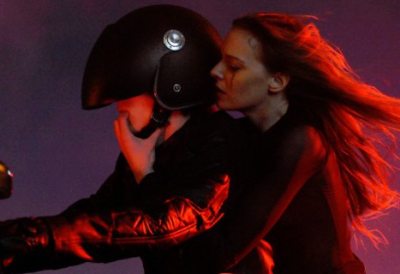